Hyperion command system ready. Processing login request… Verified.
Attention, all units! Safety catches unlocked! Download engine transferring high concentrations of energy. Login countdown: 10, 9, 8…
“Captain on the bridge.”
Welcome to Hyperion, Captain! From today onwards, you are our Captain!
Come fight for all that is beautiful in the world with us!

Get along with a diverse cast of Valkyries and their bonds will become your strength!
Join Valkyries in the war against Honkai to save the fantastic Honkai-verse!

[S-rank Character | Herrscher of Truth]
“The only inevitable truth about humanity is that humanity’s truth will change inevitably.
Bronya is the true Herrscher of Reason now!”
New S-rank character Herrscher of Truth debuts!
As an IMG-type S-ranker dealing Ice DMG, in Extremum form, she dances gracefully and fights with speed using her constructed lance. After switching to Continuation form, she constructs a futuristic exoskeleton which she uses to bombard enemies.

[New Story | The Moon’s Origin and Finality]
“I once took arms to protect someone, and parted ways with her later for the same reason. I once stood against many, with different allegiances, purposes and mentalities each time. But one thing has never changed: I’ve got to go all out because she’s as steadfast as I am.”
Story Chapter XXXIV is now available with the new mode Chaotic Dimension. Play the event to get Crystals, fists Final Form: Destiny and more.

[Featured Event | Bustling Holiday Symphony ||:]
A luck draw and a tourist attraction is still under construction.
The adventure is spiralling downward endlessly, ushering in a holiday full of surprises.
“All units attention! The tourists are close to the next area… No time for explanation! Speed up now!”
Play the event to get Sweet ‘n’ Spicy’s new outfit Freestyle Special, Crystals, Wonderful Holiday Emblem and more.

[Bonuses Event | Truth Creation]
During the event, play v6.3 events or permanent activities and complete missions on the event page to get Truth Diagrams, which can be used to exchange for Crystals and Growth Materials in event shop Truth Creation.

—-
The Herrscher of Reason has never been a simple part of history. Everything about it is reborn in the present, victorious over all from the past. 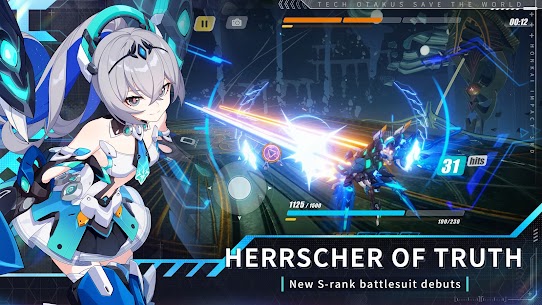